May I begin by saying that like most people I approach the supernatural genre with reluctant intrigue. It is not that I am ashamed of reading the paranormal, but I do understand that when one wants to recommend books to others, a supernatural book would not be the first on my list only out of fear of appearing altogether ridiculous. However the supernatural genre has always and will always be a guilty pleasure of mine and it is only with choice friends can I really indulge in discussion over such books. I wish it wasn’t so but alas the real world is a cruel one where we all are judged based on our interests. However having been raised on back to back episodes of TV shows such as Buffy the Vampire Slayer and Charmed, the supernatural genre is in my blood and unfortunately for some, it isn’t going anywhere any time soon. So without further ado I shall begin my latest review of a new ghost busting series by a talented author Simone St. James. 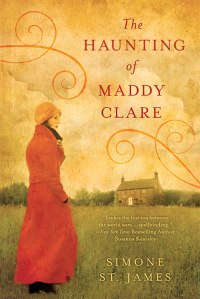 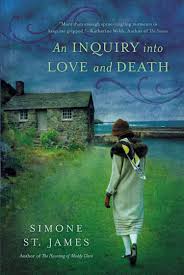 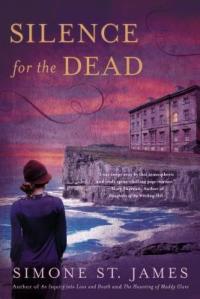 Oh yes, even the name of the author sets the tone for this captivating book series. Simone St. James, what a brilliantly refreshing name. I congratulate the author on it’s brilliance. Now as to the books themselves. ‘The Haunting of Maddy Clare’, ‘An Inquiry Into Love And Death’ and the last ‘Silence for the Dead’, this is the order of the books in the series also.

In the first book, The Haunting Of Maddy Clare, we meet our heroine, Sarah Piper, in the post World War one era. Society is a most depressed state, and Sarah herself adds to this depressive background. She seems to have no family or friends and very little to call her own. Sarah is a temp worker and the novel begins with her being assigned to assist a rather radical ghost hunter by the name of Alistair Gellis, a scarred world war one soldier, who is tracking down a ghost who hates men hence the need for Sarah’s presence. Sarah in need of quick funds accepts the job offer. The story is quite fast paced and literally begins once Sarah accepts the position. We meet a variety of colourful characters, including the aloof and mysterious Matthew Ryder who is physically scarred from the war and has an almost overbearing demeanour, but opposites attract which is evident from this novel as Matthew is the love interest for the wet rag that is Sarah. Perhaps a harsh criticism of a character, but throughout the book I find myself at odds with her character, I found her quite the damsel in distress at times, and wanted to shout at her to grow a backbone. However I must admit the other characters balance the naivety of Sarah rather well, but altogether very clear male/female roles in the story. As for the story itself, perhaps a tad predictable in certain areas but as a whole rather enjoyable, with plot twists galore, numerous hair-raising moments and a moment or two of saucy scenes. I would recommend it for those who love a good spine chilling horror with a gothic twist. Also a must for World War One fans and romance lovers naturally. Overall rating: 8/10

In the second book of the series, we meet quite a different heroine by the name of Jillian Lee, an Oxford student, who from the outset would rather remain in college then clear out a house that belonged to her recently and suddenly deceased uncle Toby, who fell to his death off a cliff. The major difference with this character compared to the first novel is that she seems to be from an exceedingly wealthy background. Her parents are away holidaying somewhere and so it is left to poor Jillian to gather together her Uncle’s possessions, which she is only doing out of duty having no real connection to her aloof uncle. Her uncle Toby lived in a seaside village with nosy neighbours, whose comings and goings seem to be quite odd. It doesn’t take Jillian long to realised that all is not what it appears to be, eerie incidents begin to take place in Uncle Toby’s little cottage and Jillian begins to discover secrets about her Uncle that she never knew, the most prominent being that he was a ghost hunter. And so we find a common ground with St. James first novel. Everyone is convinced her Uncle committed suicide, but Jillian is determined to prove that his death was not intentional and so joins forces with a charming and alluring Scotland Yard Inspector Drew Merriken, who believed that Toby’s death was as a result of murder. Drew himself, as usual with these books, has a dark past himself and the two find themselves drawn together, quite physically and quite a lot!

In fact their relationship tends to take away from the actual plot of the story due to the insistence that these characters just can’t stay away from each other, so this in my opinion hinders the pace and richness of the plot, to the point I actual found myself shouting at the character to ‘just get on with it’! I think it is the background characters that make this story intriguing with their suspicious ways, you find yourself acting as you would in a game of cluedo, guessing who is the killer and what was their motive. I found it quite difficult to attain a connection with the main character, and her relationship with Drew annoyed me to no end. Particularly with him being a ladies man his whole life, he can suddenly switch off this side of his personality because he’s suddenly found the one in the uninteresting character of Jillian. Overall one cannot ignore the fact that St. James is a pro at the game of suspense. Her clever plot thickenings and twists give any reader the thrill of the journey to discover the truth, but in the series itself, an Inquiry lacks the pace and well roundedness of the other books and would be my least favourite I must admit. Overall rating: 6.5/10

This leads us to the last and most recent book in the series (one more still to come in April 2015). Silence for the dead, is in fact my favourite of the book series. I shall try to explain why but first I’ll give the plot summary. In this book we meet the rather amusing and brazen character of Kitty Weekes, who although is the worst named character of the book series to date, is beyond my favourite. From page one the mystery that surrounds Kitty, who seems to be on the run from something or someone, immediately captures the attention of the reader. She is not your normal heroine in this book series. She is no damsel in distress (hallelujah!) and so overturns the usual male/female roles. At the beginning of the book we see her lying to obtain a position as a nurse in a hospital dedicated to the care of troubled World War One veterens, who have been left shell shocked by the horrors they have faced in the war. This hospital has an altogether Gothic name of Portis House, and a Gothic setting seeing that it can only be reached by a bridge as it is built on an island. So basically if any storms occur or if any spine chilling incidents occur, the inhabitants of the hospital are on their own. Literally. The hospital itself has seen better days, the place is practically falling apart, there is not enough staff to run the grounds or the hospital itself. Most of the building has been abandoned and was left in disarray quite abruptly by it’s previous owners (which is one of the main plots in this story). This story is not as predictable as the others and the characters themselves have to be some of the best I’ve ever imagined reading. This is a true Gothic novel. From page one we are given the plot, the problem and the person who is set upon solving a mystery. Kitty is a vivacious and brave character, if not a little bit nosey, who realises all is not what it seems in this dilapidated hospital and sets about trying to solve the mystery. Then enters the mysterious, aloof and magnetic character of Jack Yates, or patient sixteen, who Kitty is warned to stay away from, but as per usual with these kind of characters their fates are always entwined. Yates really did appeal to me as the surprising hero in the story, his back story is intriguing and his connection and how his relationship with Kitty develops, is compelling and entertaining. The other characters also balance the plot, the Matron, who at the beginning of the story catches on to the fact Kitty is not what she seems, but is desperate for the help in the hospital, and almost admires Kitty’s deviousness. We have plenty of antagonists in the story to choose from and keep us guessing who is behind the mysterious goings on. We have a brave, outspoken and slightly reckless female lead. We have a compelling love story, we have a haunting and a murderous plot, all set against a back drop of the miseries of war. Once more St. James proves herself as a capable suspense writer and I must congratulate her on this gem of a story.

As per usual, I’d love to hear your comments/opinions!