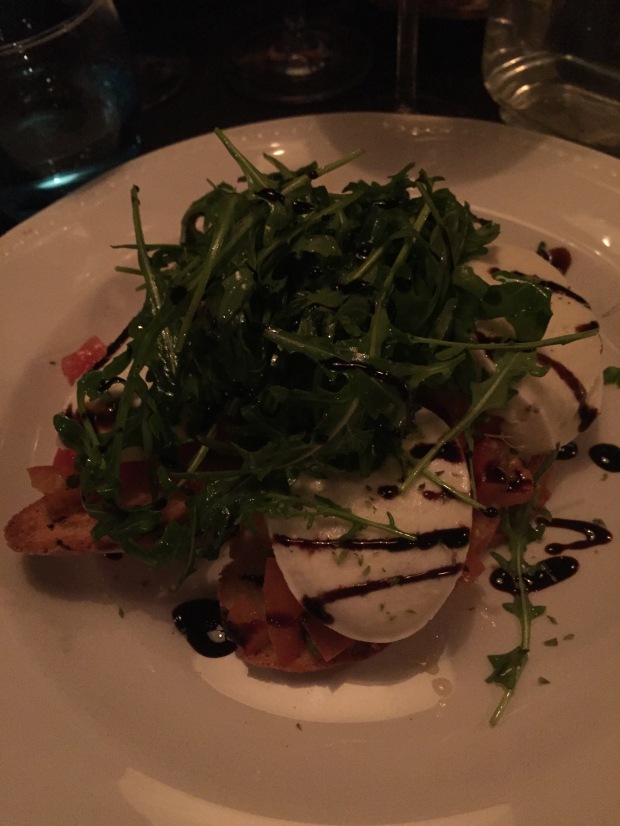 A group of friends and I dined in Rosa Madre quite recently. From the get go the staff were so attentive, catering to our every need. I readily admit I’m very picky when it comes to food so it takes a lot to impress me but having said that I would definitely recommend this restaurant to Italian food lovers, as it truly is the real deal.

On to the food: For a starter I had the bruschetta and it was so flavorsome, it was quite a big portion, three bruschettas topped with homemade mozzarella served with a rocket salad and drizzled with the restaurants signature olive oil, which if they ever start selling would make a fortune it’s that amazing!

For the main I ordered a pasta dish as I wanted to check out the homemade pasta. It was a pappardelle pasta dish which looked tiny when it came out but it was quite filling. Now I had assumed because it was described as a sausage dish that there would be slices of sausage in it but I was a bit disappointed in the end to discover that it was basically a glorified blolognese sauce. Also I love having vegetables in my pasta dishes but as this dish didn’t come with vegetables in the sauce, I ordered a side of the grilled vegetables (peppers, courgettes and aubergines) and to be honest they were much nicer than the actual main. They were grilled and seasoned to perfection and I honestly would rather have been eating a plate of them by themselves.

I was too full for dessert but one of our party ordered the Tiramisu which looked fantastic and it was a good sizes portion also.

For wine we had two bottles of the house white (€52 in total), and two bottles of red also (€64 in total). I only had the white which was quite pleasant, it almost had a fizz to it, and it complimented our meal perfectly.

The most impressive thing we found about our experience was that we weren’t rushed out of the restaurant after our meal was over. Too often in Dublin restaurants you’re hounded out as others may be waiting for your table, but we had booked in for 7:30 and we didn’t leave till after 11pm. Meanwhile the staff were so attentive, filling up our wine glasses when they noticed they were empty, also bringing more bread out in case we wanted some with our mains. Our waiter was also extremely knowledgeable wine informing us what went well with particular meals, and also answering whatever query we had regarding the menu quite efficiently.

Overall one of the best dining experiences I’ve had in Dublin City to date, and only for my disappointing main I would have given it full marks. I would thoroughly recommend this restaurant to all fellow foodies and cannot wait to visit it again in the near future.